NEXT 3000 is a brand new alternative to n-propyl bromide from Enviro Tech. It is safe, non-flammable, & can be used safely on all metals and most plastics.

If you’re looking for a more environmentally responsible alternative to Trichloroethylene or Perchloroethylene, Enviro Tech’s EnSolv is the solution for you

On April 8, 2022, the US EPA added n-propyl bromide (1-bromopropane or nPB) to the list of hazardous substances under CERCLA/Superfund. 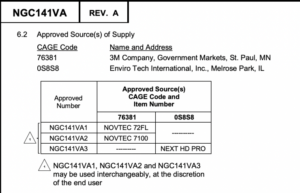 Enviro Tech International is pleased to announce they are an approved source of supply vendor for Northop Grumman – CPMPOUND, CLEANER, SOLVENT intended on light to medium cleaning of interior primed and painted parts.

How It Works: Vapor Degreasing Explained

Vapor degreasing is a quick, economical and simple process for cleaning even the dirtiest manufactured parts — both metal and plastic — using a thermo-mechanical still and a vaporized solvent.

The vapor degreaser is a machine that works much like a still. The base of the machine includes a heating element under a reservoir, known as the boil sump. Alongside the heating element, there may be a device that creates ultrasonic currents. These are sent into a taller reservoir next to the boil sump, known as the rinse sump. Both sumps are filled with a degreasing solvent such as EnSolv® degreaser.

Step 1: As the heating element warms the EnSolv® to its boiling point (70 degrees Celsius), vapor forms and rises to the next level of the chamber. The hot vaporized solvent is contained in the chamber by the cooling coils located above, close to the top of the chamber. Pieces are slowly lowered into the vapor chamber, where the cleaning process starts.

As the hot vapor surrounds the cool pieces, the degreaser dissolves the dirt. As the EnSolv® begins to cool and condense on the surface of the parts, it drips back into the boil sump, taking grease and grit along with it. This step usually takes a few minutes to complete.

Step 2: If the parts are not fully degreased after the vapor cleaning procedure — or if there are textured or deep surfaces or channels in or outside the parts — they can be fully immersed into the boil sump to continue cleaning away grease and debris. The degreaser will easily flow into any crevices or hollows in the parts.

Step 3: Once the vaporized degreaser has finished condensing and has dropped back into the boil sump, the pieces are ready to be lowered slowly into the rinse sump to clean away any lingering dirt. It is important to do this slowly to avoid splashing the solvent. The rinse sump is filled with clean EnSolv®, which is continuously being recycled and purified through the cooling coils above. As the recycled and purified solvent fills the rinse pump to overflow capacity, the degreasing solvent refills the boil sump.

Some rinse sumps incorporate ultrasonic impulses that agitate the EnSolv®, further enhancing the cleaning properties of the degreaser. When the rinsed pieces are slowly pulled back into the vapor chamber, the degreaser once again cools and condenses before falling back into the rinse sump below. The pieces are now clean, dry and cooled. They are ready for the next step in the manufacturing process.

The Importance of Degreasing

Now that we know how vapor degreasing works, let’s find out why this thorough cleaning process is necessary.

Many times, manufactured parts need to be painted, soldered, welded or electroplated — or they may require some similar processes to prepare them for assembly. Many problems are associated with improperly cleaned parts. All of these conditions could create weaker, less desirable finished products — and, in fact, would be unlikely to pass through quality control. Clean parts are safer, stronger and more durable.

If surfaces have residue left from the manufacturing process, any finishes applied to them will not coat evenly. This may leave raw metal exposed on the pieces, inviting rust and corrosion. Welds on uncleaned or greasy surfaces may not fuse tightly, resulting in cracked or porous weld joints. These failed welds can be dangerous, inconvenient and expensive.

Enviro Tech’s EnSolv® degreaser is used in a variety of industries:

Vapor degreasing with EnviroTech’s EnSolv® is an economical, safe and simple solution for any manufacturing process that involves dirty, greasy components. EnSolv® leaves nothing behind, no oxidation, no water spots, no worries.